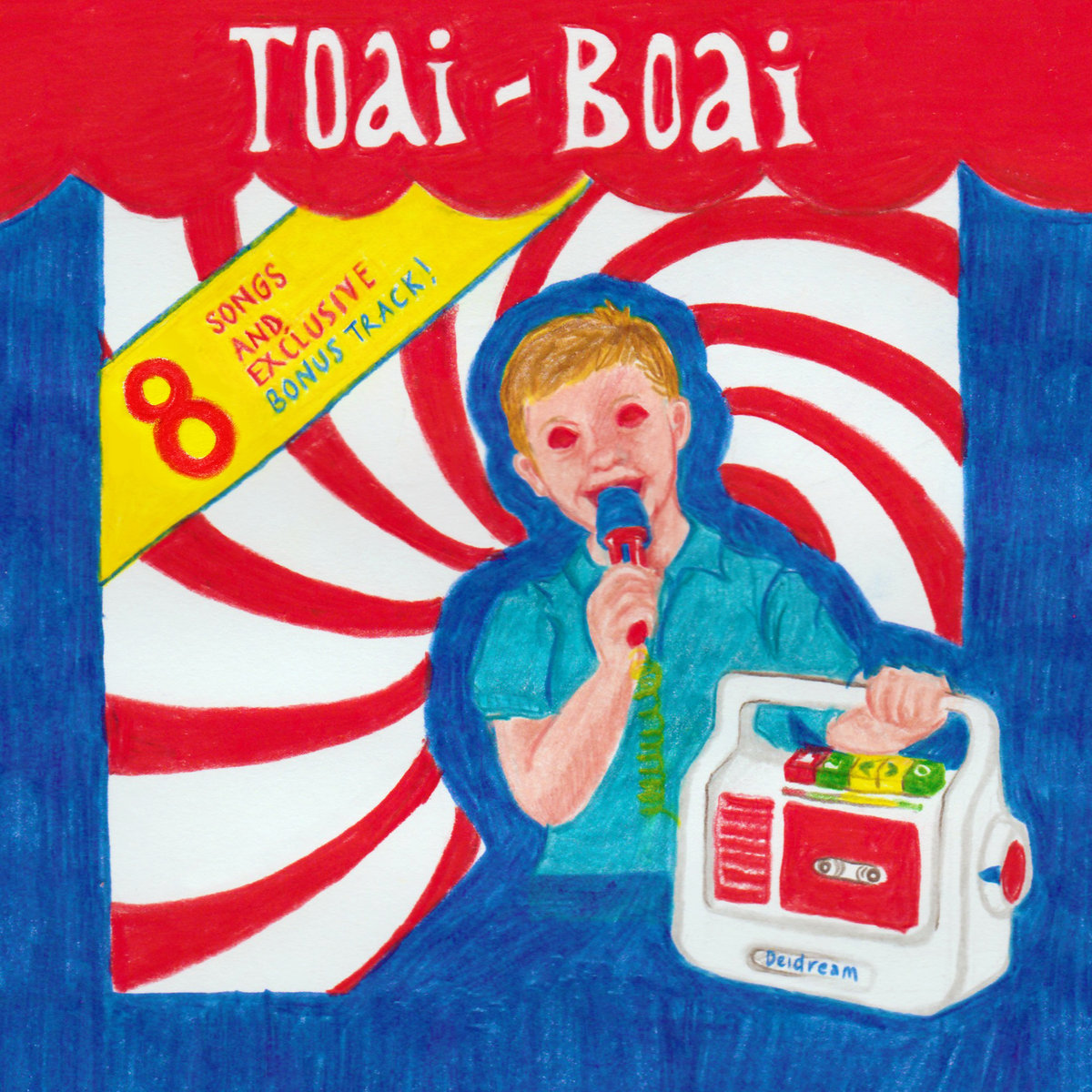 Getting back into the funk of things, I have a brand new review for the blog. This time we look into ‘Toai Boai’ by Belgium chiptune artist, ‘Deidream’. What makes ‘Deidream’ unique is the down to the amount of experimentation they go through. Throughout ‘Toai Boai’, a total of ‘seven’ instruments are used to achieve the style that ‘Deidream’ strives for, from the PO-12 Rhythm (drum machine) to the staple gameboy.

Whilst the majority of songs achieve this goal, I believe the track that is at the forefront of this is the opening track, ‘Toai Boai’ (incidentally what the album is named after). Interestingly this is the one of the few tracks that doesn’t use the game and instead ‘Deidream’ opts to use the PO-20 Arcade and PO-28 Robot as the both the brains of the melody.

The brings with a bright arp which spreads itself across the whole channel, but then suddenly stops, bringing into the PO-12 drum machine into the mix. From there we hear some fantastic percussion programmed into whilst chords and melodies are played expertly. One of the best things ‘Deidream’ shows is their use of the PO-28, which is capable of playing excellent solos. They flow fantastically and create such amazing sustain as well as atmosphere. From there we are then treated interesting melodies that retread familiar grounds, until just before the 5 minute mark, when ‘Dreidream’ abruptly slows the tempo of the track, before sending it into overdrive, to the realm of drum and bass. This is when things start to get real interesting with the familiar arpeggios played before, pushed faster than before.

‘Toai Boai’ is a great opening track to a very unique album and shows such as varied difference in its speed and structure.

Just under 12 hours until the crowdfunder ends! After that you’ll be able to buy tickets from Party For The People at £9.00. If you decide to buy on the door they will cost £10.00.

Here comes the penultimate interview and it’s one I’ve been putting off for a while; ‘Kojin’. ‘Kojin’ is a Manchester based chiptune artist who relies on using Gameboys and other devices to eclectic EDM music. Close to releasing an album, Kojin has been up and down the UK playing to hyped audiences, as well as even playing out in Tokyo. Outside of his music, Kojin does is own blog known as, ‘Chip Bit Sid’ which he has been doing for 4 years. He also operates one of the biggest chiptune events in UK, Chip Bit Day which will be hitting its 4th year.
https://www.facebook.com/kojinchiptune/
https://twitter.com/richjaylewis
https://soundcloud.com/richjaylewis

1. Who are you, what is your artist name and where do you come from?
My name is Richard Lewis and my artist handle is, Kojin. I come from Manchester.
2. What music do you make & what instruments/hardware/software do you use?
I make heavy edm but using Various different devices and software: Mainly, a Gameboy advance running Nanoloop 2, a Gameboy running LSDJ, an Arturia Drum Brute and Mini Kaoss Pad. All this is run through Behringer Format Mixer. Occasionally I’ll use extra devices such as, a gameboy running Nanoloop Mono, a Korg Monotron, Volca Sample or PO-12. I also have TR-707 which I sometimes use also, but mainly for collective purposes!
3. How did you get into the chiptune scene?
I first started by looking to sign up artists off Bandcamp for netlabel, WE ARE THE FUTURE! I eventually started listening to artists like Disaster Piece and Protodome. I decided to go Superbyte 2014 and there I made lots of new friends (such as, Wil Morgan) and found out loads of new artists. Once WE ARE THE FUTURE wound up, I decided to make my own blog called, ‘Chip Bit Sid’. This quickly snowballed and I found myself getting seriously involved with the chiptune community. A few months later I started making my own music on LSDJ and a year later I started Chip Bit Day.
4. How has your music evolved since then?
I debuted at Chip Bit Day 16 as ‘Jellyatrix’ and my music was more Hyperpop. I continued it for a bit until I plateaued and couldn’t take my music seriously. To try something different I ended up buying Nanoloop 2 off Paul from Pain Perdu and it opened up a whole new world for me, as my new artist name, Kojin. I eventually start pairing up Nanoloop with LSDJ and the volca sample to which I got a great response, especially at Chip Bit Day 15. Since then I’ve been going from strength to strength and now I feel like I’m ready to finally debut my first Kojin album!
5. Where have you played?
I’ve played mainly across the North of the UK, however I’ve also played in London and even in Tokyo, Japan!
6. What has been your favourite venue you’ve played at?
My favourite I’ve played is my most recent gig at Percy’s Bar & Cafe in Whitchurch. By far the most unique place I’ve played, it’s also where I played one of my most successful sets and got the best feedback!
7. Describe your music in one word (or emoji).
個人
8. What’s been the highlight of your musical career?
Probably Chip Bit Day 18, I was playing a fantastic set above a load of monitors I’d set up for the VJ. The Pictures of that gig look amazing!
9. What’s your favourite artist and song at the moment?
My tastes constantly change but at the moment, it would be Classic Mistake and his latest track, Leftover. I’ve been amazed how good Classic Mistake has been getting since his first nanoloop album. Leftover was made using Nanoloop 2 & Mono along with some FX pedals.
10. What one piece of advice would you give to someone starting out in chiptune?
Constantly experiment. Go out and get new instruments. When making music on LSDJ think of sounds like math, adding two things together to make a kick. Don’t be afraid about asking the chiptune community about how to do things. Everyone is incredibly helpful.
11. Favourite game soundtrack?
Persona 5’s whole soundtrack. I thought nothing could Shovel Knight, but GOD DAMN.
You’ll be able to catch Kojin at Chip Bit Day 19:
5.45pm, June 15th, Atma, 11 Stevenson Square, Manchester M1 1DB.

Just under 48 hours until the crowdfunder ends! After that you’ll be able to buy tickets from Party For The People at £9.00. If you decide to buy on the door they will cost £10.00.

Next up on the interview roster and local to the Manchester scene, we have ‘Myths & Monsters’. ‘Myths and Monsters’ uses a Gameboy Advance SP to power analog synthesizers, with influences including the early electronica of the 1970s, film soundtracks of the 1980s and 1990s dance music. Most recently he has been pushing the knowledge of LSDJ with Midi, showing a lot of tips & tricks through videos.

1. Who are you, what is your artist name and where do you come from?
Ste Whiley, Myths and Monsters, Bury (Greater Manchester)
2. What music do you make & what instruments/hardware/software do you use?
80s and 90s influenced electronic music using a Game Boy Advance SP controlling synths.
3. How did you get into the chiptune scene?
I was in a geeky folk-rock band, using a homemade music box and Gameboy occasionally as quirky instruments. It’s all that people asked me about after gigs and on social media so when we disbanded, I took it to a whole new level.
4. How has your music evolved since then?
I’ve been taking more influence from 80s horror themes and the seminal electronic acts of the late 70s and 80s. Kraftwerk, Jean Michel Jarre etc.
5. Where have you played?
In the 18 months since I started gigging, I’ve played at Arcade Club in Bury, Chipfaced in Macclesfield, at 3 Halloween nights, a chiptune night run by Unexpected Bowtie in Glasgow and a pub in Harrogate.
6. What has been your favourite venue you’ve played at?
I loved the Glasgow gig venue. There was a vegan restaurant above where I had some amazing haggis, neeps and tatties.
7. Describe your music in one word (or emoji).
🤓
8. What’s been the highlight of your musical career?
Working with Professor Elemental on a track. His voice is still on my Gameboy cart and crops up live sometimes.
9. What’s your favourite artist and song at the moment?
Orbital – Monsters Exist
10. What one piece of advice would you give to someone starting out in chiptune?
The chiptune community is very friendly, don’t be afraid to ask questions on online forums like ChipWin.
11. Favourite game soundtrack?
Golden Axe C64. ‘Thief’s Theme’ is my alarm clock.
You’ll be able to catch Shortee at Chip Bit Day 19:
6.20pm, June 15th, Atma, 11 Stevenson Square, Manchester M1 1DB.

Next up is a cool dude from Germany who utilises a turntable with his music; ‘Shortee’. Hailing from Leipzig, Shortee makes beats on Gameboys, whilst simultaneously scratching vinyl on a turntable. His opening track ‘Guten Morgen’ on his album ‘Lost’ was featured on my top tracks of 2018 and is a belter to listen to.
https://shortee.bandcamp.com/
https://soundcloud.com/shortee

1. Who are you, what is your artist name and where do you come from?
I am Shortee from, Leipzig Germany.
2. What music do you make & what instruments/hardware/software do you use?
I make music in various genres from Beats and Dubstep to Drum and Bass. I use ‘LSDJ’ on a ‘Gameboy’ against a ‘Numark PT01 Scratch Turntable’.
3. How did you get into the chiptune scene?
I got into Chiptune as a listener – probably almost 30 years ago when i got a Commodore 64. As producer, I started making chiptune music 4 years ago when i got gifted a box full of gameboys.
4. How has your music evolved since then?
The biggest change was combining LSDJ with my love for scratching by adding a portable turntable to my setup.
5. Where have you played?
Various clubs in my home town, as well as chiptune parties all over Germany and at ‘Chipwrecked Festival’ on a small danish island called, ‘Bornholm’.
6. What has been your favourite venue you’ve played at?
Chipwrecked festival. It’s on a small island called, ‘Bornholm’ and what’s more, it’s situated on a farm.
7. Describe your music in one word (or emoji).
8bitbass (yes.. that’s one word).
8. What’s been the highlight of your musical career?
Soon to be playing my first gig outside of the EU 😉
(Huge respect for that -Richard).
9. What’s your favourite artist and song at the moment?
IC3PEAK – Смерти Больше Нет:
https://www.youtube.com/watch?v=MBG3Gdt5OGs
10. What one piece of advice would you give to someone starting out in chiptune?
Just two words: have fun.
11. Favourite game soundtrack?
Very old: Turrican c64
Old: Final Fantasy IX
New-ish: Hotline Miami
You’ll be able to catch Shortee at Chip Bit Day 19:
6.20pm, June 15th, Atma, 11 Stevenson Square, Manchester M1 1DB.