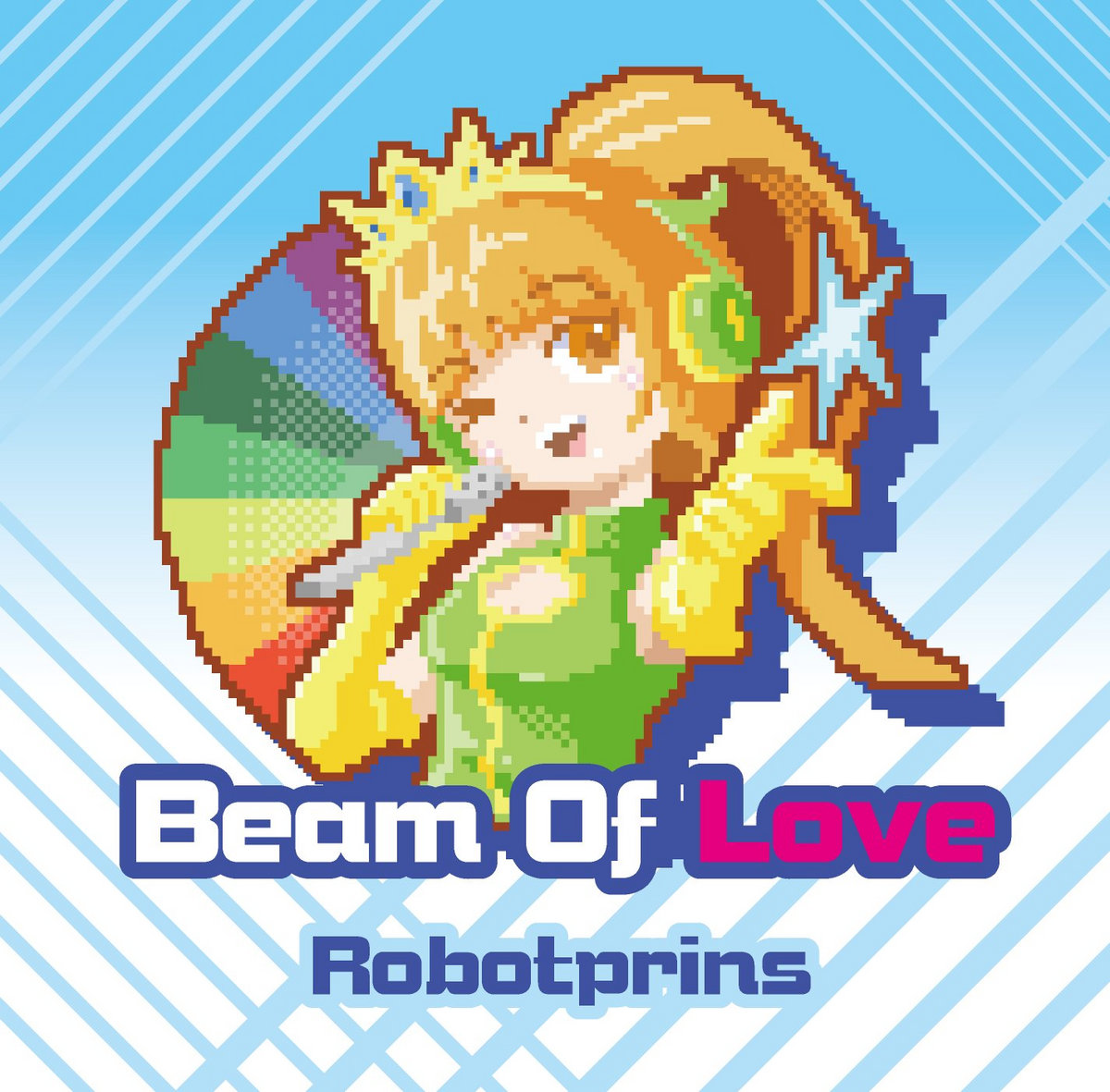 I had the very nice pleasure of meeting Robotprins back in 2017 when I was in Japan for Squaresounds Tokyo. Originally from Sweden but now residing in Japan, Robotprins’ music is blend of nes style chiptunes against wild and fancy guitar skills. I’ll be looking at his latest release, ‘Beam Of Love’, an EP consisting of two tracks.

The main focus of ‘Beam Of Love’ is evidently its title track, and is a collaboration between ‘Robotprins’ and ‘Yurika’. The guitar, programming and lyrics have been crafted by ‘Robotprins’, with ‘Yurika’ lending her vocals to the track.

‘Beam Of Love’ begins with ‘Robotprins’ delivers a tangy, solid guitar riff. This serves as main driving force for the track and is handled by the guitar and nes music. As the guitar rolls forth, the chiptune programming takes shape, shimmering and shining. Its sound is both bright and powerful, and fits perfectly in the world J-pop. However, its main strength is how Robotprins’ chipmusic compliments Yurika’s vocals. It enboldens her voice, balancing the tone and harmonising it beautifully.

Speaking of, Yurika’s vocals during ‘Beam Of Love’, she does a spectacular job throughout the whole track. Her singing really lends to the story; about Robotprincess getting reprogrammed by ‘Ondman’ and sent to fight ‘Robotprins’. In order to restore ‘Robotprincess’ to her former self, ‘Robotprins’ must use the ‘Beam Of Love’. Whilst the lyrics maybe quite out there for some, Yurika’s voice really helps covey the quirkiness of Robotprins’ story and further develop its charm.

‘Beam Of Love’ was a bright and beautifully crafted track that managed to bring some shine in what is now the middle autumn (or fall). 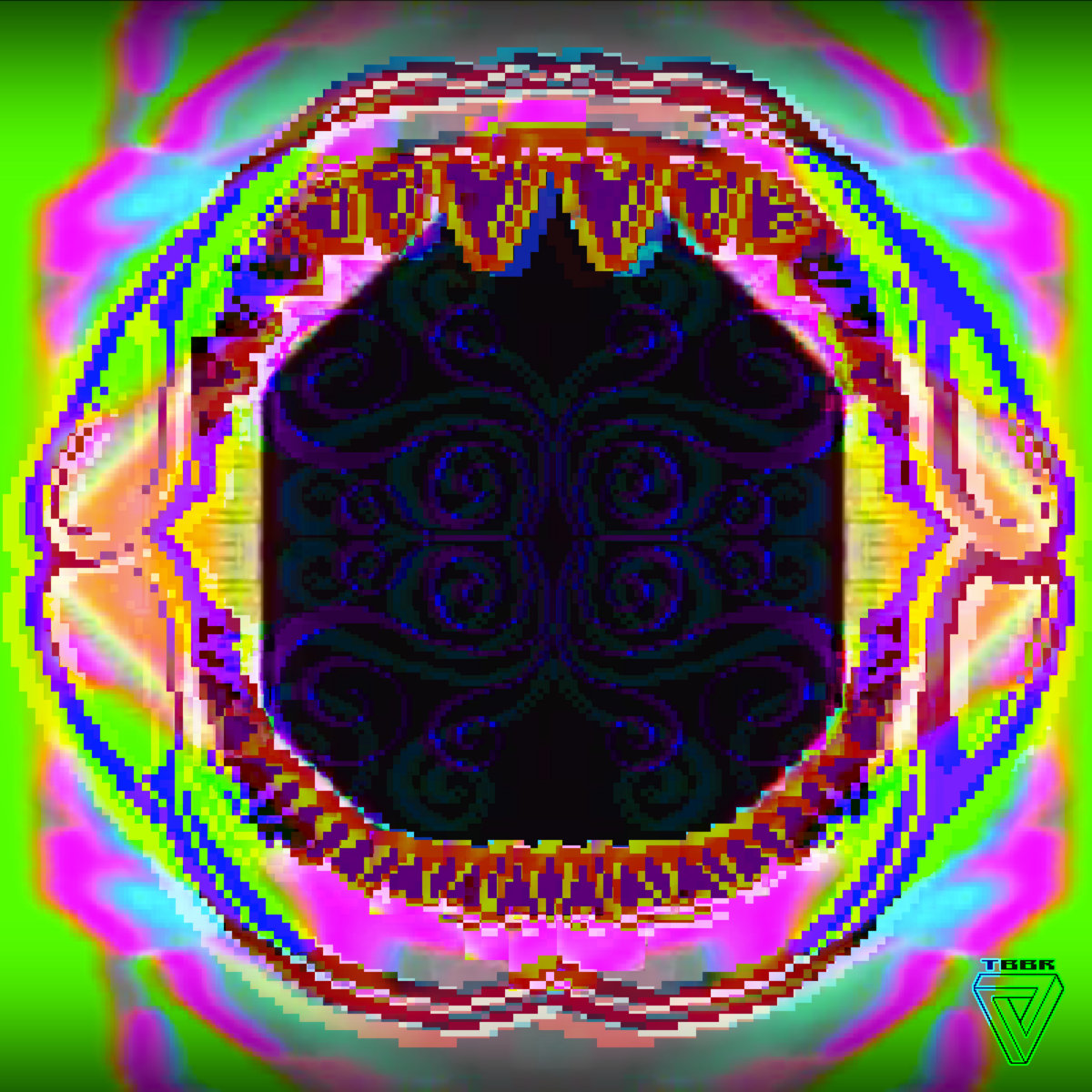 It’s the first week of October and here I am reviewing yet another nanoloop release. This time we have Boaconstructor’s ‘Winds Of Null’. For context into ‘Boaconstructor’, he is a Seattle based musician who also runs ‘The Base bit’ one of the go-to net labels of chiptune. ‘The Base Bit’ have released a variety of accomplished albums from artists, from ‘Refresh’ from Trey Frey, to ‘Steel City Zone’ by ‘HarleyLikesMusic’. It has been three years since ‘Boaconstructor’ has produced an album, with ‘Loop Dreams’ being released in 2015.

Whilst ‘Loop Dreams’ and ‘Winds Of Null’ were produced using Nanoloop, they vastly different albums. ‘Loop Dreams’ focusses on using modulation to create weird and wonderful noises on a high BPM. ‘Winds Of Null’ on the other hand, focusses more on the bass, as well as detuning the melody and slowing down the music. For me I prefer Boaconstructor’s latest album, as I found it more accessible to listen to. The recording and mastering are also in my opinion much more of higher quality. Everything seems to pop better, with the levels balanced much better than ‘Loop Dreams’.

Getting into why I prefer ‘Winds Of Null’, the best example is the first track ‘Rainier Dub’. It begins with an excellent introduction by detuning the melody. ‘Boaconstructor’ does this by using a slow LFO on the pitch. It’s eerie but very effective as it provides a nice contrast to the main hook that begins afterwards. As soon as that starts, it hits you like rolling thunder, the twisted, bassy notes flow free and sounding dangerous & detuned. The drums are also alive and kicking, complimenting each bass note played alongside. The snare and kick both pack a massive wallop and due to the slow BPM, are only used when necessary. This allows the sharp bass to breathe and be heard more clearly.

For me ‘Winds Of Null’ is a welcome album in a year which already seen  many fantastic releases recreated on Nanoloop. It is well crafted featuring many hell raising hooks that will leave you scratching your head on how it was produced. Those snares in particular will make me re-think on how I create them on Nanoloop. 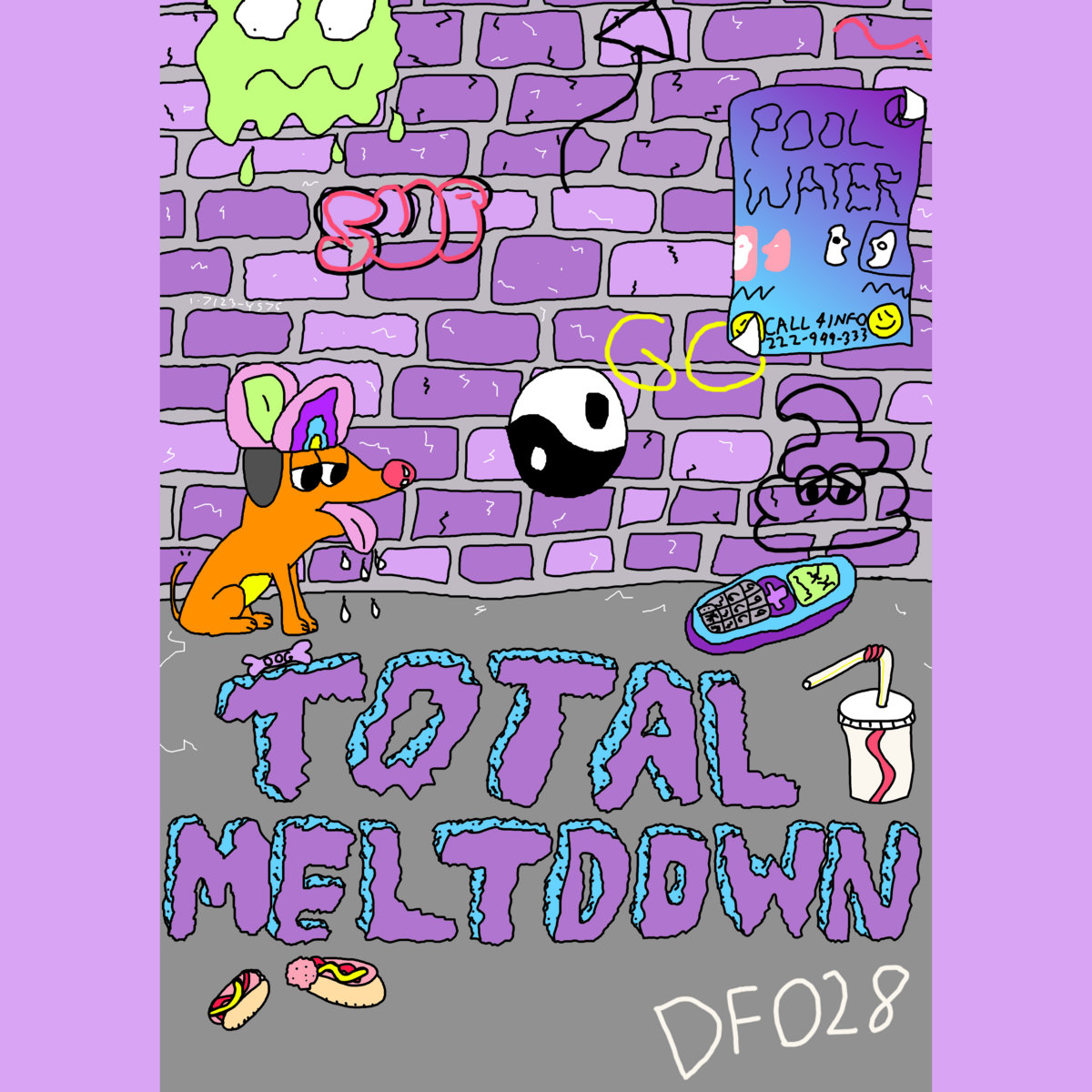 Instead of writing about chiptune, I thought I’d look into something a little more different. ‘Total Meltdown’ is the Acid House album from artist ‘Pool water’ and released with label, ‘DataFruits’. I’ve been following the net label ever since they released Glooms’ album, ‘Vanilla Dome’. Whilst I found a lot of the releases were full of character, Pool water’s ‘Total Meltdown’ was the one album that caught my attention.

Recently I’ve been getting into Acid House, going as far as to buying a Volca Bass to introduce into my music. Pioneered by madman experimenting with ‘Roland TB 303’, the aggressive sound really brings an edge to the music. Yet when I listened to ‘Total Meltdown’, it is evident that there is more to sink your teeth into than just acid bass.

This brings us to my pick track, ‘No Way Back’. Whilst a majority of the tracks really focus on the funkiness of the bass, ‘No Way Back’, instead goes more into other areas. It works more on merging samples together whilst also focussing on the bass simultaneously. A good example of this can be heard at ‘2:00’, where ‘Pool water’ constantly mashes a manipulated sample saying ‘Jack Your Body’. As they’re doing this, we still have the bass pumping along, providing a wet yet powerful line throughout. This part alone, gives ‘No Way Back’ a fantastic rhythm, which is both chaotic and funky.

Although ‘No Way Back’ is one of my favourites, there are plenty other tracks which are great! For instance ‘Jack Your Body’ or ‘Let Your Feet Stomp’ are both head nodders. In fact listen to Pool water’s ‘Total Meltdown’ in one sitting; you’re guaranteed to at least get into the funk a few times! 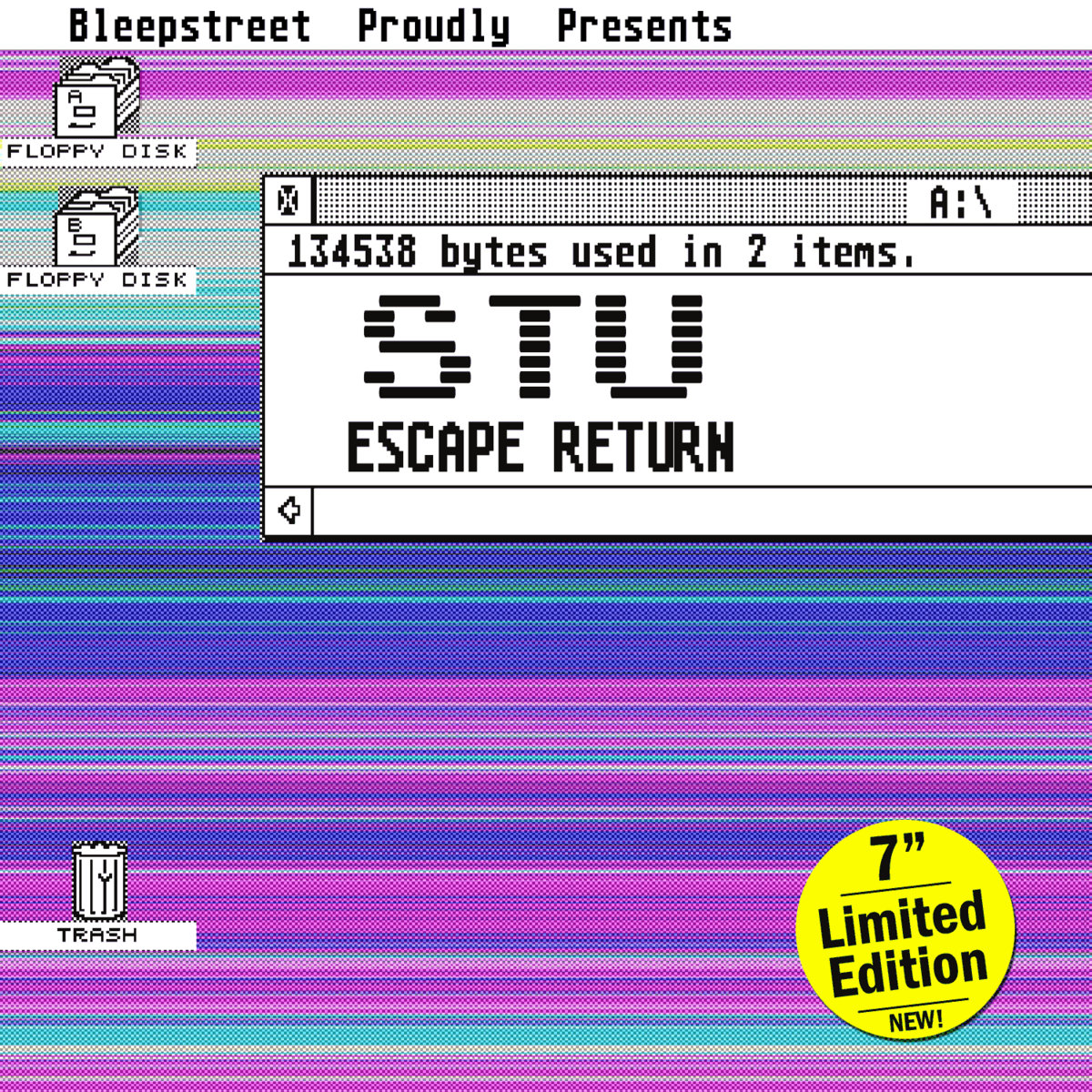 This week I’m looking back on an small EP I missed out on during December/January from the artist known as, ‘STU’. ‘Escape / Return’ is a wonderful dancey album, released alongside ‘Bleepstreet’ and solely consists of two songs, ‘Escape’ &  ‘Return’. For context on ‘STU’, he is an old skool chiptuner from Basel, Switzerland, who specialises in utilising various old modified computers, one being his prized Atari ST. Looking at his style, ‘STU’ focuses on making Dance infused arrangements, instead of producing the usual staple VGM known from chiptune. ‘STU’ has been active for well over 10 years, creating a variety of eclectic beats.

As this is a 2 track EP, I’ll be reviewing both songs instead of picking one and focussing on it. ‘STU’ describes the EP as something that catapulted off into space, only to fall back down in form as a 7 inch vinyl. We start off with the first track, ‘Escape’. It kicks off with a superb rising introduction which is then brought to life by some rhythmic arpeggios, serving as the hook of ‘Escape.’ The sense of sound that is brought here reminds me to that of Henry Homesweet’s album, ‘Luke’s Atari’, which actually also uses the same sound chip. ‘Escape’ also uses some aggressive sawtoothed synths, which are then brought to life through LFO, Cut Off and Filter. The sounds really remind me of the TB-303, due to the excessive use of the Cut Off and acid style it produces.

‘Escape’ really comes into its element at ‘2:16’ where ‘STU’ bring a variety of musical layers to the table. we firstly have an aggressive synth whilst simultaneously being oscillated. We then also hear the staple arpeggio chords, used sparingly as staccato rhythm when required.

Whilst ‘Escape’ has an accessible beat the opposite can be said for ‘Return’. It starts off with a rather peculiar beat, almost sounding as if the song is actually backwards. As ‘Return’ builds up we then has some hard & dirty synths; a bass that is a sharp as nails and melodies that wiggle and wobble rather funkily. Although ‘Return’ is a lot shorter than ‘Escape’, it makes up for this by having some really memorable parts. A good example can be seen at ‘1:47’ where we have aforementioned wobble melody. This part takes the lead as the heaviest sound off STU’s two track album.

I really had fun taking and listening to ‘Escape/Return’ by STU. Whilst it was only two tracks, I felt it was enough to warrant looking further into STU’s music catalogue. This ended with me buying his latest album on cassette, ‘Atari Worx 2003-2008’.