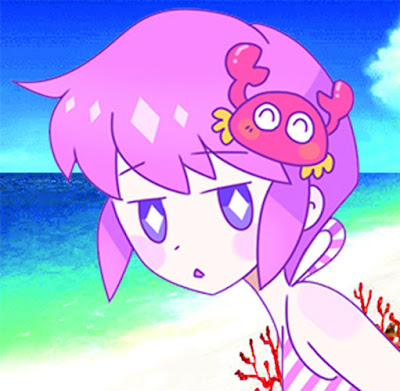 This is slightly different from my standard reviews that I generally do here. This week I invested in the discography of Slime Girls. If you haven’t heard of Slime Girls, they’re electronic pop band who reside in Los Angeles, California. They’ve been going on a few years now, with a list of 4 albums to brag!

I’ve been meaning to buy a Slime Girls album for a while, but never could grab them all. So when I saw I could buy the entire discography off Bandcamp for $9 (a pittance in pound sterling), I jumped at the chance to get them all!

Since then I have listened to each album endlessly, soaking in the energy of every song with almost all of them a blast to hear. However when it comes the blog, I can’t review every single one, so I’ve rounded up 3 albums I think best show off what is great about Slime Girls! Let’s get into this!

This is a small EP mainly full of remixes of the titled song, but it’s a great album, nonetheless! Both Slime Girls’ original songs, ‘HEART ON WAVE’ & ‘Video Girl’ are packed full of meaty beats, melodies and the signature music style. It’s quite a change from the gritty style of their first album, Vacation Wasteland, and sounds more closely towards Anamanaguchi, more so ‘Video Girl’, which reminds me of ‘Planet’ from ‘Endless Fantasy’.

However, LSDJ’s roots are not forgotten, with a remix of ‘HEART ON WAVE’ entirely on game boys. It’s so good it’s hard to tell the difference between the two! As for the remixes, they provide another great 2nd serving to what are already great songs. All are amazing, with my favourite being Petriform’s remix, due to its progressive opener. Also adore the artwork, and is the best cover out of all Slime Girls’ albums.

The one thing I like about Slime Girls is the fact that they always seem to change up the style for each album, be the two single EPs, or the first album, Vacation Wasteland. No Summer No Cry is something completely different from the other two, going down the conceptual root, with the main theme about how summer has gone too quickly. It starts with the best slowly intro I’ve heard in a while called, ‘we never saw the ocean’ and it feels like as if I’m watching The Goonies all over again! It then goes into ‘Summer is Gone …Again’, an updated version of Vacation Wasteland’s original LSDJ track. It’s a nice revision from VW’s rendition, and matches its energy well.

I really love the unique style of No Summer No Cry. It’s completely different from the prior single EPs, and its not afraid to go into other genres which don’t fit with Slime Girls’ general sound This includes such songs as, CCC (Gelato Beach Ver.), which sounds as if I’ve gone into a Nintendo game!

I really wanted to put this at my top albums. Every song was unique, and you could feel the amount of passion that went into creating it (it even came out on my birthday, proper stoked am I)! However, only time will if tell if the album will define music, which I believe is what my no.1 has done, and why I put ‘No Summer No Cry’ as my no.2.

In my eyes this is probably the best of Slime Girls’ repertoire. Before I sat down to give it a listen, I couldn’t understand why it was so popular on bandcamp. I suppose back then, I was new to the chipscene and hadn’t begun to appreciate the finer details of chiptune. But now I can see why, with its perfect balance of gritty chipmusic & the surfpop genre both coming together extremely well. Almost every song comes into its own, with songs such as, Summer is gone, which features some lovely harmonizing pulse channels, and Splash Nebula, featuring fantastic leads over the top of some brilliant guitar & drum backing.

Don’t go on just these two songs however, as the WHOLE album is genius and and a must have for any person wanting to expand their chiptune catelogue or even get into the genre! As a whole, I feel Vacation Wasteland really helped shape the chiprock community across USA, as we now have countless bands following suit such as, Astroskeleton, Melt Channel & Shadynasty, all absolutely brilliant. I’m looking forward to Slime Girls’ live performance, and hopefully they’ll come to the UK (get in touch with Superbyte guys)!

If you liked all Slime Girls’ music feel free to check out their bandcamp support them.
https://slimegirls.bandcamp.com/