Yes folks, it’s that time again. I’ve decided to kick off yet another Chip Bit Day, bringing with it some of the best chiptune artists Europe has to offer! To show some of the people playing this year, I thought I’d write an article focussing on each one, whilst featuring a pick song that I think you’ll all like!

Pain Perdu have only just come onto the Chipscene recently, but they’re already well on their way to becoming huge artists in the chiptune community. The duo consists of Maxime & Paul who hail from France. They mainly focus on doing hardcore dance music through Gameboy Advance SP’s, as the console allows them power to both harness & distort samples into their own means. This can be heard in the pick track from Pain Perdu, ‘Artefact’ which begins with a rather beautiful introduction, coveted some fantastic sounds & melodies. On the flipside however, Artefact changes drastically, providing a more hardcore rhythm, through both it’s bass & drums. Pain Perdu is one of the artists I’m really looking forward as I’ve only heard one of them (Paul) play.

2xAA played last year at Chip Bit Day and brought with him a fantastic house set using a gameboy advance & Teenage Instruments PO. 2017 saw the release of 2xAA’s latest album, ‘Flow’ via DATA AIRLINES, a fantastic collection of tracks, several of which worthy of Top chiptune tracks of the year! So it was obviously a no brainer that I had to bring 2xAA back to Manchester to give us another taste of Nanoloop goodness. Check out the Pick track above, ‘Pegnitz’. It’s a recent song from 2xAA, and both a sinister & chilled out track which utilises the fm synth in Nanoloop brilliantly.

Mizkai is a long time gameboy artist who resides in Wales. She is fantastic when seen live as Mizkai comes in full Japanese Fashion attire, complete with mega sugariness & energy. her costume & personality matches her music style perfectly, the high octane energy radiating from her melodies & rhythm. Her covers of Kyary Pamyu Pamyu really show her music style wondefully also, especially the pick track above which is one song the majority of Japan lovers will know very well, ‘Pon Pon Pon’.

I’ve been getting into a lot of hyper pop & crazy music, so who better to have at Chip Bit Day than Space Candy. Hailing from ‘London’, Space Candy has already released an album called, ‘Forest’ with net label, ‘Deskpop’ much to good acclaim. His unique style is filled sporadic, unique rhythm & peculiar melodies. It is something that is refreshing to have at Chip Bit Day, rather than just the usual gameboy jazz. Listen to Polythene Crunch & you’ll see why!

Next up is Alex Lane, originally from Australia but now resides in ‘Southsea’, UK. His rather beautiful yet hard nails style to LSDJ is both inventful & thought provoking. Just listening to the pick track above, ‘Caustic’, you can hear why his music is quite mesmerising. Literally coming out of the park with a rather haunting but carefully crafted melody, it really packs quite a punch.

The dubstep kid of GameFaceShow, DunningKruger has already broken into the chipscene, with his mesmerising performance at ChipBattles’ Champion, but his first live set went brilliantly at Bitnoise’s first event in Manchester. Although this pick track is off his soundcloud is quite old, I implore you to check out the video of is full live set on youtube. It’s pretty epic!

This is just a few of the artists we’re going to be hosting live at Chip Bit Day, as I’ve still a couple more to come! If any of them got you interested, why get a ticket off our crowdfunder. Just check out the info below! 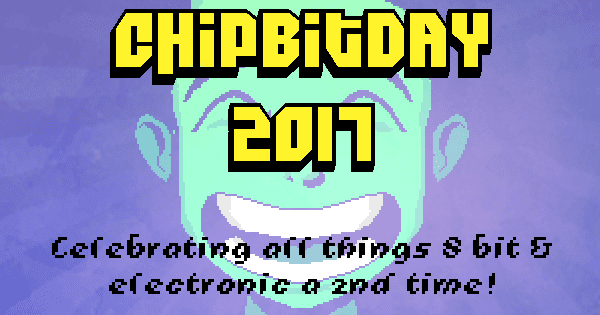 Last year on 23rd April the first outing of Chip Bit Day had a superb line up; HarleyLikesMusic, J3WEL, 2xAA, xX Critical Strike Xx, .Mpegasus, GwEm, Kenobit, Auracle, Jellyatrix, Euan Lynn & Joe Bleeps. Needless to say I got some incredible feedback from people, so I decided to host it again.

Check out our indiegogo crowdfunder below!