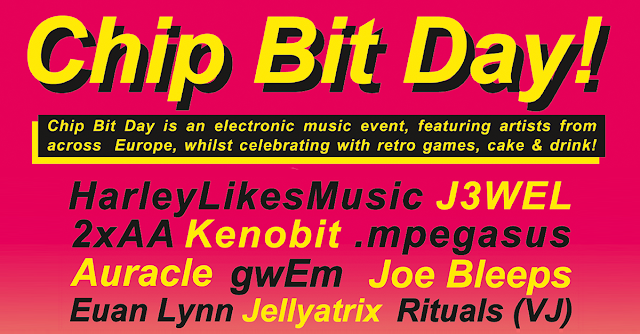 No review today unfortunately. Instead I’d like to talk about Chip Bit Day. When I first started off the event, it was really something I’d intended as an anniversary for my blog, which had hit a year. It started off with a few of artists such as, me, .Mpegasus, Auracle, GwEm & Euan lynn. However, it quickly gained traction and become popular, becoming even more so when I began the crowd funder. It built up quite a bit, with more artists helping out, such as Joe Bleeps, J3WEL, HarleyLikesMusic, Kenobit and ChipBattles to finish off the list.

Needless to say, Chip Bit Day went off splendidly pulling in people as far as Italy! We even had a secret set done by x x Critical Strike x x.

Now I couldn’t do Chip Bit Day by myself and I had a lot of help from people everywhere. So below I’d like to give a special thanks to the people who helped make Chip Bit Day a reality.

• GameFace Crew: For helping by giving tips and helping out with the marketing. It wouldn’t had a far reach it wasn’t for the gang!

• The Backers: For supporting something and pushing Chip Bit Day even further. The event could ended before or after £500, but people chose give more and more and it helped make the day awesome! Much appreciated.

• My family: For giving money to Chip Bit Day, but even going further and helping with the money & merch stand. My mum even made a load of cakes which I gave away free to eat for everyone. It was those small things that made it extra special. Thanks!

• My girlfriend, Natalie: For supporting me, the event and my chiptune music since the start. She was never into Chiptune music, but the support she gave me was inspirational. She even did the photography throughout Chip Bit Day, taking some amazing images.

• My friend, Rob: Same as my girlfriend, he wasn’t into Chiptune music, but nonetheless he helped out with the event and supported the campaign. It was much appreciated even if working the door was extremely hard.

• Jimmy, the Cart maker: The lanyards, one of the things that made this whole event freaking awesome, were 3D printed by my friend, Jimmy. Each one was an arduous task but he made 50 of them, not once asking for money. This is something I greatly appreciate, because without them, it wouldn’t have been what it was.

• The artists: For supporting the Chiptune event, providing great feedback and great people to work with. I definitely want to continue working with everyone in the future.

• Biz Mcquiz: For providing some top notch visual on such short notice. Rituals was originally going to take over, however it wasn’t to be and instead Biz took over and made something brilliant.

• Chiptunes = Win & Chiptunes Reddit: For all the support & upvoting and keeping the Event alive. Brandon especially, for donating & expecting nothing in return. It’s things like this that keep the chiptune community alive.

Without all these people, Chip Bit Day would have never gotten to where it was.