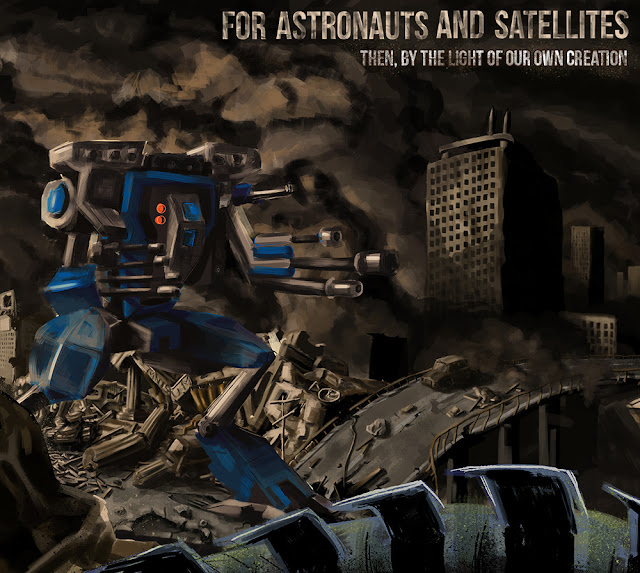 I’ve been deeply invested in For Astronauts and Satellites. I became fan ever since listening to their first self titled album, which everybody needs listen to. Since then they have quickly began to make waves through the chiptune scene, and now have released their 2nd album through label powerhouse, Cheapbeats.

Then, By The Light Of Our Own Creation is a conceptual album based, around themes of apocalyptica, invasion, and the bane of technology. With their 2nd album, F.A.A.S are sticking with their tried and tested post-rock formula, however this time around, they have focused a little bit more the progginess of their music.

The album first opens up with, When the Ocean Rose Up, which plays as a simple but layered piece, building up until its crescendo of distorted fuzz of guitar and commodore64. You can also tell that time has been spent on the drums. This factor is heard throughout the album.

Point All Your Weapons Up At The Sky, starts off with a nice jam of guitars and chiptune, playing rhythmically against one another, before bringing some atmospheric drumming under the hum of the commodores and game boys.

To Fight Monsters is a very proggy piece, beginning fast at the start but then having a huge breakdown, with the drums quietly adding percussion in the background. It also doesn’t seem to have a structure like the songs prior, making it stand out in the album.

Both We Created Monsters & Lost in Smoke are songs that wander throughout, however the latter focuses more on guitar, with the chiptune taking a back seat for atmosphere.

The final song, Dust Settles, Titan Stands with F.A.A.S’s longest song to date, and by the far the most progressive song off the album. It’s an interesting and thought provoking, and gives the impression that our own creations could be our downfall. You can also find a nice uplifting finish at the end something I couldn’t find throughout the album.

In the end I feel so much thought and heart goes into this F.A.A.S album. They’ve learnt so much, so quickly, and have made 3 albums within the space of a year. A remarkable feat! In the future I’d like to see more progression and maybe more upbeat songs into the mix, perhaps to shake things up. These are only a couple of things I’d like to see, happen to what is already a stellar band.

Buy the album on Cheapbeats