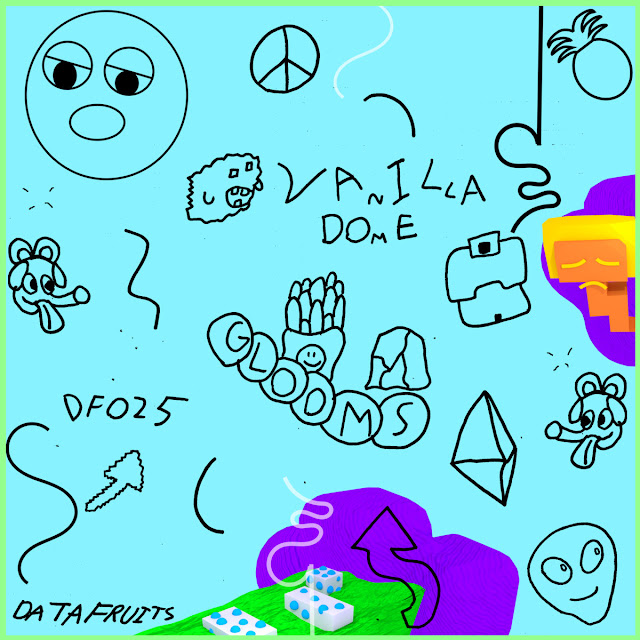 After handling the behemoth known as Chip Bit Day, it feels great to get back into doing some reviews. After racking a collection of chiptune albums, it definitely seems like Nanoloop is topping the list for 2018, with certain release such as, Monotony’s ‘Eternal Slumber’ Party & Classic Mistake’s ‘Geothermal’. Next on my list is ‘Vanilla Dome’ by ‘Glooms’ and released with, ‘Datafruits’.

Started a few years ago in Seattle USA, ‘Glooms is a project by Tanner Hughes, spanning over a variety different machines, from Nanoloop to Electribes & Ableton. ‘Vanilla Dome’ focuses more on the combination of Nanoloop & Drum Machine.

We begin with the opening track off the album, ‘Vanilla Dome 1’ which kicks out vibes like a chilled sunday morning in bed. Starting out with shimmering arpeggio scattering itself, it’s soon built upon by the rolling sound of eclectic drum beats that are complimentary towards the chilled out nature, like rocks to a scotch. Seriously though, the drums pop beautifully, with instruments such as the kick giving off just a tight, high toned click. Check out ‘1:09’ for a good example off what I’m talking about. Outside of the percussion, the melodies are also sublime too, weaving about perfectly with each other. Filter & delay effects are further added in for good measure, providing an extra layer for the dynamics of ‘Vanilla Dome 1 ‘ but giving the extra kick that the song needed.

Whilst ‘Vanilla Dome 1’ is more an upbeat chilled tune to melt to, the opposite can be said for my next pick track, ‘Lifestyles of The PNW’, which comes across feeling more like an exorcism of house music. This is down to the several hooks, such as, ‘The chanting keys’, which ring out like a choir of gouls in unison. This sound is used for much of Glooms’ music and particularly effective; here’s some context to why. To the listener, all this sounds very uncanny and strange. This is because ‘Glooms’ has de-tuned much of the sound as well as using odd matching notes, making them sound slightly out of key. The method in turn makes the listener cringe a bit because of the unfamiliarity of the sound. It’s mainly down to this why ‘Lifestyles of The PNW’ is a stand out track for many on ‘Vanilla Dome’ album. One other thing that contributes to the signature sound, is the constant use of delay on each and every channel, whilst using dynamics on the speakers to make everything flow around the listener. It’s particular effective practice when trying to push ghastly themes.

Glooms’ ‘Vanilla Dome’ was an interesting listen, namely down to Glooms being one of the few artists who takes advantage of Nanoloop’s syncing capabilities. I’ve only seen a couple artists do this (2xAA & Cheapshot to name a few). Admittingly Nanoloop 2.0 can be quite limited sometimes in it’s form whilst compared to LSDJ, however there are a few points make the software far stronger than the latter, with the easiness to sync up play being a big win for me. With releases like ‘Vanilla Dome’, Nanoloop is definitely shaping up to be chiptune synth of 2018.