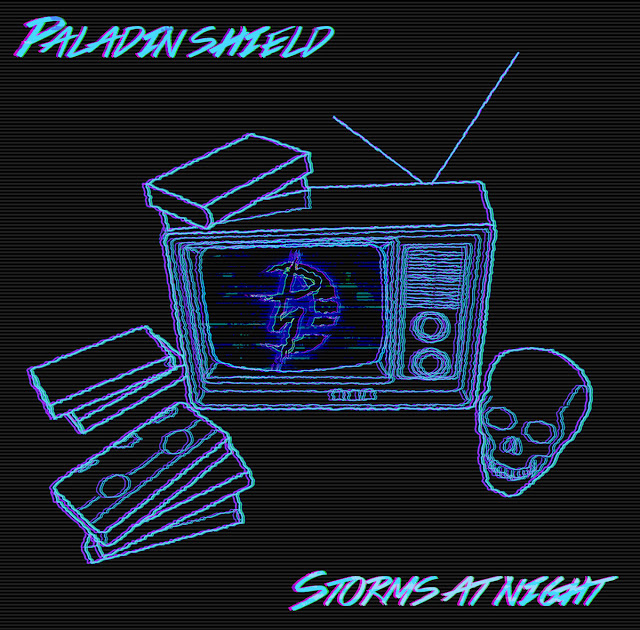 This week it’s time to go back into the American West Coast Chiptune scene, with ‘Paladin Shield’ releasing another album called, ‘Storms At Night.’ If you haven’t heard of Paladin Shield, they are a 3 piece band from Los Angeles, California. The band consists of ‘Tib Van Dyke Jr’ on drums, ‘Lindsay Baffo’ on Guitar/Vox, and finally ‘Jesse Avila’ on Bass, Vox & 8bit Programming. Their first release, self titled as, ‘Paladin Shield’ was met with much praise, and re-released it as, ‘Road To Alchemy’ with extra material & a cassette release via ‘Data Airlines’.

‘Storms At Night’ opens up with the self titled track of the same name. The song starts off quickly, with raw & jagged gameboy programmed riff. It kicks ‘Storms at Night’ with a huge punch, whilst an epic fill of drums is supplied by Tib. Jesse’s voice then comes into fruition, echoing over the guitar, drums & gameboy. One of the things I’ve always loved about ‘Paladin Shield’, is Jesse and his singing skills. It seems to really invoke bands of both old & new, from ‘The Stone Roses’, with Ian Brown’s sombre tone, to the delay filled voice of Adam Kessler, from ‘The Drums’. However that’s not all! With every song, (‘Storms At Night’ especially) you can tell the band members play mega tight together, even when each person has to keep up with the music of a gameboy.
‘Storms At Night’ is a good, song, however I wouldn’t say it’s the best one of the album. That award goes down to the 2nd track, ‘Timberskin.’ When compared to ‘Storms At Night’, I feel the music & vocals in ‘Timberskin’ are far more powerful, both in their energy & tone. ‘Timberskin’, is a lot slower, so it allows each instrument to be heard more easily, as well as leaving much more room for the gameboy programming to make an impact. As well as that, the gameboy leads are also very catchy and I found myself humming along with the music. Finally there’s much of a difference in Vocals of ‘Timberskin’, with the strength of it being found in the melody. It allows for much emotion to come through in Jesse’s singing, especially in chorus, in which he blasts out the words with such raw energy.
‘Storms At Night’ is a fantastic high powered EP to show off what ‘Paladin Shield’ have been getting up to since ‘Road to Alchemy’ was re-released last year. I feel they’re trying to be a little more progressive in song writing & gameboy programming as you never really know where the leads or vocals are going. I would say however their album, ‘Road To Alchemy’ was a lot stronger in terms of song structure, but with their signature style already secure they shouldn’t be worried with future albums.