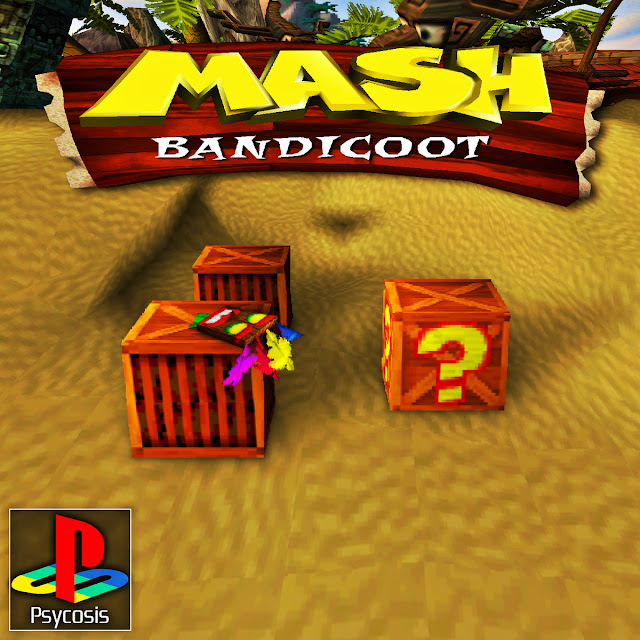 Sometimes in chiptune & vgm you some of the craziest music. This time is now. This weeks album was something I found a while back when I was scouring through all types of VGM. ‘Mash Bandicoot’ is the insane experiment by British Artist, ‘Psycosis’, and is exactly what you’d expect. A mash up of all things crash bandicoot whilst combining hip hop & rap. Sounds extremely ludicrous?

You’re right. It is. But for a bandicoot fan like myself, it’s so so good!

The first track to hit your ears is, ‘Overworld Celebrity’ is the first mash up, taking the track, ‘Oh Yeah’ by ‘Yello’, whilst mixing in almost perfectly with ‘N.Sanity Beach’, the first level of Crash’s adventure. It works amazingly well, the bounciness of N.Sanity Beach against, Oh Yeah’s rhythmic lyrics, throwing itself superbly, whilst the tip tapping of the former track’s lead. Overworld Celebrity also works well in keeping the cheekiness, something which can’t be said for a couple of tracks, such as ‘Fuck Tawna’.

Another track which fantastically mashes together well, is ‘Up The Super Bass’, and use’s Nicky Minaj’s track, ‘Super Bass’ against, the 10th level on Crash’s soundtrack, ‘Up The Creek’. Psycosis blends both tracks, complimenting Up the creek by adding a large amount of reverb to Super Bass. It really helps mellow out Minaj’s rough rapping, as well as lending itself to the seapunk genre she’s mostly known for (ruining).

Although these two tracks hit perfectly, there are some that don’t necessarily mix well together. As said before ‘Fuck Tawna’ doesn’t work well, but others such as, ‘Wild I Are’ kinda miss the mark as well. However that’s not to say this isn’t one awesome album, and I hope people are more adjourned to do stuff like this in the future.

If you want to hear more, check out the bonus round someone created, with some more crazy ass mass bandicoot: [Link]