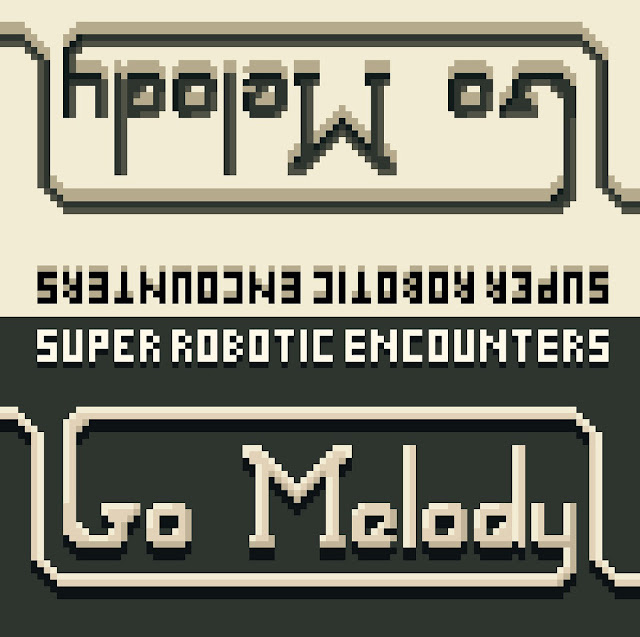 This weeks review I decided to listen to something a bit more melodic. Super Robotic Encounters is a chiptune musician (real name, David Day) based in the United Kingdom. Bay has been making for over 15 years, with the last two years as a semi-professional musician. He bases his music around mainly ‘silly melodic bitpop’, but also goes over into the genres of VGM & chipmusic. Bay has also created a couple small EPs & LP, prior to the present album.

Go Melody is Super Robotic Encounters 3rd album, with 11 bitpop/chiptune tracks. The past few months I’ve been mainly listening to music with a beat, so Day’s silly, happy style was a nice change.

My first pick song is the second track off the album, ‘Wake up, Mister moon’. It starts with really cute keys as an introduction, giving the feeling you’re looking up towards the night sky. It then kicks in with fantastic winding melodic lead, whilst hooking you in with the fat bass & drums. This is great early song, to get you into Go Melody, as it really reminds me of those Super Mario years I used to play on the 64. Good times!

If you’re a big fan of Mario, then sit back cos all these songs are like a fantastically written love note to the red plummer.

Whilst the majority of the songs are around 2 minutes long, all of them are very unique in sound, melody & style, whilst keeping to bitpop. My second pick song, does just that. ‘Homely’ is a very bluesy song which hits you with a fantastic 8bit organ instrument, followed by some funky leads. It really shows how much skill Day has in creating music, as everything in this song comes together well, and even though some melodies may get used again, he changes the style of the instrument, opting for a deep square sound.

The next song to entice your ears, is ‘This is the end’ (even though it still plenty more songs after it). It kicks straight into its main riff, a nice bluesy & uplifting number which compliments the style of the song. This progresses into the chorus at 00.37 and lifts the song even further than the verse had. After listening to the song, I guess the theme for ‘This is the end’ is that its a tribute to all the songs at the end of video games, which is why its such an epic number!

The final song to tie off this four song list is the last tune off Go Melody’s track list, Systems Fall. It’s a lot more different from the others, being more funky whilst using minor scales & chords. The biggest change from everything else is that there’s a lot more layers of instruments and music, with the drums really taking a step up. It begins quite basic with just a melody, bass & drums however, the tables are turned at 1.27 when some extremely fat and distorted bass. This kicks the song up into serious overdrive and ends the album in such a spectacular way.

I had really fun listening to Super Robotic Encounters’ latest album. It reminded me of Izioq’s past album, Retro Life, as they both had variety and fantastic melodies throughout. Go Melody, was a great change to what I listened to prior to the album, due to its carefree style and beautiful melodies.