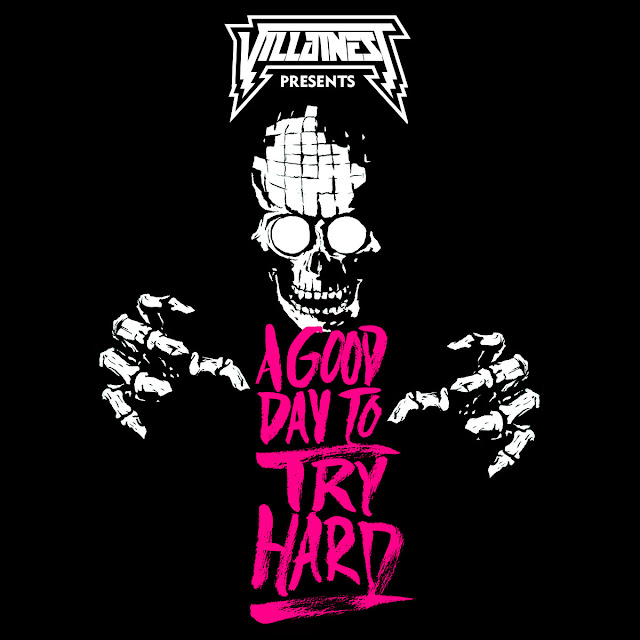 A while ago Anamanaguchi blew people away by fusing rock music with chiptune. Since then they have inspired many other bands to do the same, redefining chiprock even further, with Melt Channel, Slime Girls & Astroskeleton to name a few. Villainest are the latest band to come out to do the same, with their latest album, ‘A good day to try hard’.

Villainest are a sega mega drive-based party rock band starting up in 2013, Toronto Canada. Villainest’s style is combination of keytars, hard rock guitar & the square waves from the mega drive. ‘A good day to try hard’ is their 4th release and features 8 tracks, half of which are their sega mega drive counterparts.

We kick off with Villainest’s title track, ‘A good day to try hard,’ aptly inspired by the fifth instalment of Die Hard 5, which Villainest cites, coming with ‘critical acclaim’. The track starts slowly using shimmering noise resonating, along with squares sounds ringing out & the screeching vocals of guitarist, James Harding on the top. The intro is very atmospheric and creepy, building up to the the hook of the song, a real funky keytar lead. It really reminds me of Egyptian styles that have been used in films such as, Indiana Jones. ‘A good day to try hard’ really shows off what the band is made off, giving you a taste of the sega synth, guitar & keytar, as well as the unique crunchy, spooky style that Villainest have crafted.

‘The machine’ is another track is which is both atmospheric, mysterious & down right creepy, starting with punchy chords, drums & leads from the Sega Megadrive. It’s a nice intro to show what the megadrive’s FM synthis capable of. This is interrupted at 1.10 with blaring distortion & joint singing from the band; it’s harrowing, but oh so awesome. Off the entire EP, this is probably the most powerful song, featuring a truly strong chorus that is complimented by some energetic fills & and one face melting guitar solo. The machine really reminds me of Faith no more’s 90s song, Midlife Crisis, mostly down to its creepiness & powerful hooks throughout.

The final song, ‘Peach’, is completely different from it’s prior spooky tracks, as it’s more lighter, sticking to major chords & a bouncy beat, sequenced from the sega mega drive. The distorted spoken word lyrics really promote the style that Villainest were going for, as well as the funky short chorus that’s absolute treat to hear time & time again. Overall ‘Peach’ is an absolute blast to hear, with it’s style reminiscent of the Yeah Yeah Yeahs.

Another cracking EP to add to the best albums of 2016, Villainest’s ‘A good day to try’ hard features so many outstanding tracks, that you’ll find yourself quickly becoming a fan. Not only that. but to have every track re-done as a 16bit megadrive remix is an absolute want!