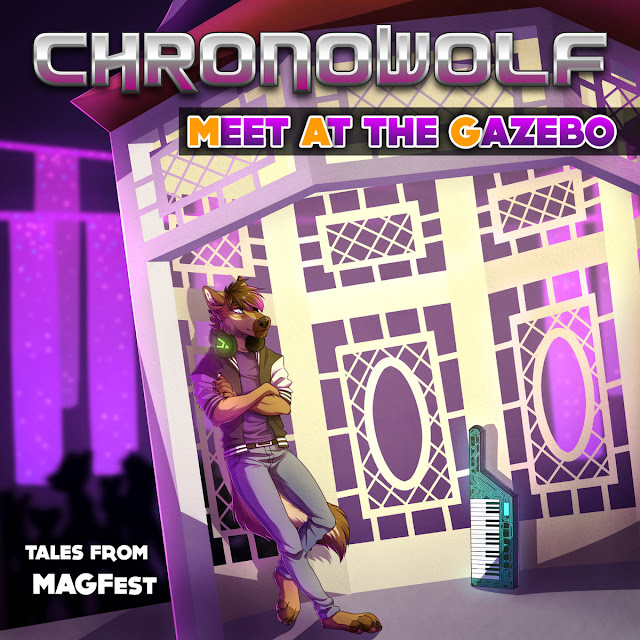 Hello all, it’s good to be back after a long hiatus. The reason for this was that I had to divide my time up between Chip Bit Day, work & video games (haha) and I couldn’t give any time to the blog. So I took a break. But I’m back and have a whole load of reviews to get through. Let’s start with one that’s been on my list for a while.

I reviewed Chronowolf’s previous album, ‘Genesis’, last year and while it was a well produced, I felt it focussed too much on the orchestral aspect. However his latest release, ‘Meet At The Gazebo’ feels more rooted down to his chiptune style. This 7 track album was both written and performed during Magfest, with the title taking inspiration from the iconic gazebo, situated at ‘Gaylord National Resort’ in ‘National Harbour, MD’.

‘Meet At The Gazebo’ is a great album, however whilst each track packs a punch, I can only pick two, so here they are!

Starting with my first pick, ‘Meet At The Gazebo’s’ self titled track is by far one of the songs that strikes a chord with me. It feels like a the perfect balance of Chronowolf’s chiptune style and his orchestral style. Whilst the majority of the tracks feature a blend of tight & fast solos, as well as heap load of arpeggios, I feel with the track ‘Meet At The Gazebo’ proves that less is definitely more, certainly in this case. The longer sustain on each note allows other elements to speak more, with a good example being the break fill made through the sound chip. The epitome for me however, has to be it’s heart pounding hook, which first begins after the ‘1.00’ mark. It seriously brings ‘Meet At The Gazebo’ into a song of it’s own, upping the ante and standing apart from the rest of the songs in this album.

Next up is a track, which a few people heard before, ‘Singularity’. I talked about this track previously in my ‘Chiptunes=win compilation review’ a long while back (just under 2 years if I’m not mistaken)! Immediately from the start of this wonderful track, you’re greeted with a heart pounding hook which quickly serves as the crux of the whole track, being used quite often to link parts from one to another. However it’s not just the hook that’s enticing, it’s also the amount of face melting arpeggios & racing snares which keep pushing this track to the unique delight that it is.

‘Meet At The Gazebo’ by Chronowolf is wonderful surprise that made my long hour car journey from Manchester to London and see Hyperwave that much more enjoyable. His style is both bright and refreshingly unique, whilst making each part of the album extremely enticing to listen to.