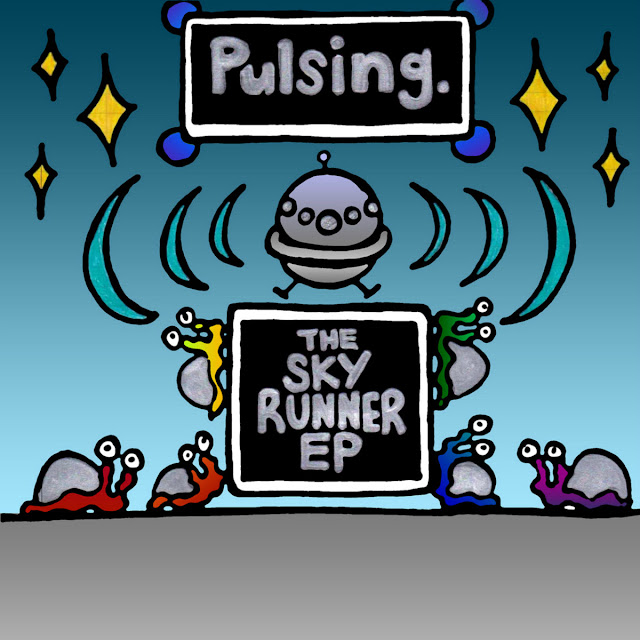 This week I was given Pulsing’s latest EP ‘Skyrunner’ to review via uk based net label, ‘Pterodactyl Squad’. Pulsing is an artist who is based in Cedar Falls, Iowa and has been new to the chiptune music since September 2016, with his first single ‘Beach House.’ His music style tends to be centred around, punk rock & EDM, featuring tight melodies & heavy bass grooves. Ultimately however Pulsing’s music is really about having fun, much like Mizkai’s & x Crtitical Strike x’s style.

Getting to the mix of things, The opening track, ‘Moonside’ sets the happy tone for the EP. It immediately kicks things off, featuring a whole array of crazy, noodling melodies upon each other. It’s gives it a great touch of personality and suitable to Pulsing’s overall style. The groove at the start however, feels a tad too early for me, and I can’t hear the kick’s come through due to the focus on melodies. This all changes however at ‘0.45’ when an fantastic lead comes in, kicking ‘Moonside’ further into the stratosphere. The track also really reminds me a lot of ‘Skybox’s music’, due to the use bright arpeggio’s, as well as it’s creative use of the pulse channel. ‘Moonside’ is a very energetic & crazy track, but I feel it’s slightly let down by the intro. I think it could use a bigger drop, but that’s just me.

The track that really picked my ears up however was ‘Attack Slug’. It really peaked interests thanks to it’s extremely intuitive use of LSDJ’s pulse, WAV & noise channels. The intro alone is proof of this; it feels like a mixture of easycore & dubstep, and the pulse channel serves as it’s strength in fills & texture. The breakdown however at ‘01.35’ is even more incredible, down to the heavy focus on the WAV channel, whilst the pulse & noise channels plays 2nd fiddle, providing fills & further sporadic mania, to what is already an stand out track.

Although Pulsing’s ‘Skyrunner’ is very creative in its use of melodies & the pulse channel, I feel it can be quite overbearing at times, when I’m trying to enjoy the bass & drums. That said, Skyrunner is Pulsing’s 2nd EP, in under a year so expect his style to be more awesome & refined in the months to come.