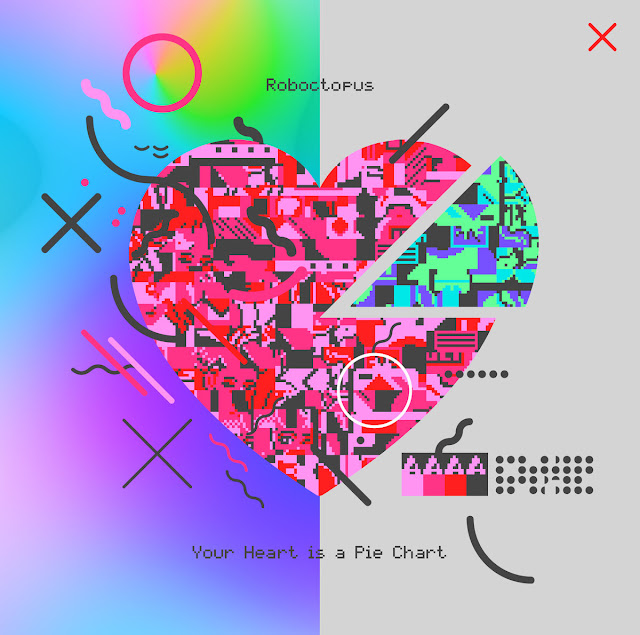 It’s a real scorcher up in Manchester, so what better than to review ‘Your Heart Is A Pie Chart’ (released via CheapBeats) by long time chip musician, ‘Roboctopus’. Residing in Maddison, USA, ‘Roboctopus’ has been making chipmusic for well over 5 years now, establishing himself a following as one of the greats in chiptune. Primarily focused using gameboys to make his music, ‘Roboctopus’ has been pushing the sound chip to the max, thinking up new ways on how to convey sounds, whilst keeping it all melodic.

It has been three years since ‘Roboctopus’ released his previous album, aptly named, ‘Jelly’, so this latest release has been highly anticipated; and let me tell you, it doesn’t fail to deliver.

A lot of ‘YHIAPC’s’ tracks are quintessentially unique, however one track which particularly caught my ear was, ‘Slow Motion Sunset’. Although the Roboctopus’ titled track (Your Heart Is A Pie Chart) was a good song to begin with, I felt this one really captured what it set out to do. Every instrument rings out to produce a perfect & mesmerising sound, that both hooks & chills you out. The beginning particularly is a stand out part for me, as the bright & melodic sounds feel incredibly uplifting, as well as being a great fit for a sunny drive in the car (true story). However this is further worked on at ‘3:12’ where ‘Roboctopus’ introduces a very wet & stacato-esque square-wave. That riff solely makes you feel as if you’ve just plunged into a swimming pool!

Finally to give the track one huge send off, Roboctopus changes it up with a new chord progression as well as, a slow but catchy lead that drums in the notion that ‘Slow Motion Sunset’ has a lot of heart!

‘Slow Motion Sunset’ is a great melodic track to show Roboctopus’s charm, however there’s one track which really shows his real talent, and that has to be ‘Waste LAN’.

How every bit of this song has been created is anyone’s guess, but I can tell you that the majority of it is done through LSDJ’s manipulation of the WAV channel. Two gameboy’s are also utilised together to allow for more sample mixing.

The introduction itself, is sublime. The jazzy vaporwave keys softly floating, whilst another snappy sample (a guitar) is used over the top, complete with an arpeggiated pulsewave. However, ‘Waste LAN’ truly gets into the mix of things at ‘0:49’ when both samples of the WAV’s are hacked rhythmically with such music precision. It creates a soul inspiring soundscape rarely seen in chiptune, but also becomes something entirely different outside the genre too. It was definitely a welcomed track for the middle of June.

‘Your Heart Is A Pie Chart’ is a fantastic album from ‘Roboctopus’, which shows off both his charm & knowledge in music. However what makes this album even more complete is being released in the middle of summer. The amount of feels I had driving in 28 degree heat the other day was crazy.